The Trump Misogy-Meter meets Donald Trump where he lives – stuck in a perpetual Mad Men era. Trump’s sexism veers between misogyny and chauvinism, punctuated with heavy doses of locker room bravado. Who better to illuminate this retrograde behavior than the Mad Men of Sterling Cooper?

Last week Donald Trump pointed out an African American attendee at one of his rallies, argued that a “Mexican” judge born in Indiana cannot fairly adjudicate the Trump University case, and attacked Elizabeth Warren as “Pocahontas.” He neglected to trade in his unapologetic sexism or racism for presidential decorum despite Paul Ryan and Company’s pleas. Instead he promised to MAKE AMERICA GREAT AGAIN by reviving the racial etiquette of Roger Sterling.

Roger Sterling, the accounts man who puts the Sterling in Sterling Cooper, shares a number of qualities with Donald Trump. Both men come from backgrounds of wealth and entitlement and both toss out racist stereotypes like Don tosses back Old Fashioneds. For example, in the Mad Men pilot Roger searches the halls for a Jewish employee to use as a prop in a meeting with Menken’s department store. He boasts, “I had to go all the way to the mail room, but I found one,” [1.1] much like Donald Trump who thought it appropriate to say, “Look at my African American over here!” when he surprised himself by spotting a person of color at one of his rallies. Both men took pride in their accomplishments and unsettled audiences in the process.

In “The Chrysanthemum and the Sword” [4.5], Roger, a WWII veteran, cannot bring himself to treat Honda executives with respect even when fledgling SCDP needs the new account. He refers to the men as Pete’s “new yellow buddies” and makes comments about dropping bombs and seeking unconditional surrender in front of the visiting execs. For all of Pete Campbell’s flaws, racism is not one of them. He knows that SCDP has precious few accounts and cannot afford to lose Honda’s business, just as Paul Ryan knows the RNC cannot risk alienating an entire generation of Latino voters.

Trump appears to disagree. He spent the better part of a week asserting that U.S. District Court Judge Gonzalo Curiel cannot possibly do his job fairly because he is “Mexican” and therefore must hate Trump for his scheme to “build a wall” along the US-Mexico border [“I’m going to build a wall!]. Ryan noted that The Donald’s assertions smack of racism and cautioned him to tone down his remarks just as Bert Cooper admonishes Roger to get his behavior under control regarding Honda. Don Draper comes up with a winning plan to woo Honda back that involves this fantastic image:

Lacking its own winning plan, the GOP simply trades in one racist debacle for another. Fresh off his comments about Judge Curiel, Trump reacted to Senator Elizabeth Warren’s eviscerating and highly entertaining speech in which she pointed out his racism by responding with more, well, racism. And because he was dealing with a woman of consequence he mixed a bit of sexism into the following tweet.

The “Pocahontas” reference questions Warren’s Native American heritage, while the “Goofy” moniker and “nasty mouth” question her intellect and femininity to distract from her authority as an elected official. Senator Lindsey Graham, no lover of Trump, found the “Pocahontas” barb rather amusing and suggests Warren learn to take a joke. Trump’s, and perhaps Graham’s, knowledge of Pocahontas and Native American culture appears as extensive as the Sterling Cooper creative team’s which recommends “dressing the stew[ardess] as Pocahontas” in a Mohawk Airlines campaign [2.1].

With these examples in mind, this week the TMM awards Mr. Trump one Jim Hobart for infantilizing women and three Rogers for the racism – lots and lots of racism. 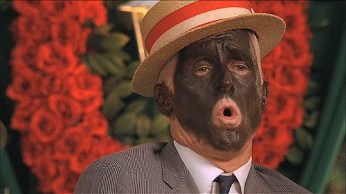 Until next time the GOP might want to consider the chances that Trump will trot out his own version of this in July to complete their nomination nightmare.

Mad Men, including all characters, images, and video, is the property of Lionsgate and AMC.