Guy and I just saw The Hobbit: The Battle of the Five Armies, also known as The Never Ending Story. It is by far the best installment of the three films based upon a book that takes up less than an inch of shelf space. This commentary, by the way, will include spoilers, lots of them, an important warning for the few of you who have neither read the book nor seen the film. I say this as a person who is currently watching a certain 2004 sci-fi series about cylons and does not want the ending spoiled. There is always a chance that someone living under a rock has no idea how J.R.R. Tolkien’s story about a halfling-turned-burglar concludes and wants to wait for pay-per-view to see it. I am not that person and I want to tell you that I loved this movie. A lot. It offered surprises in the form of a bad-ass Galadriel, fantastic battle scenes and what I was most eager to see – symmetry between its ending and the beginning of The Fellowship of the Ring.

This film taught me that an angry dragon has the ability to cause an impressive amount of property damage, some from flying too close to the ground, most from the trade-mark fire-breathing. Smaug terrorized the weak citizenry of Laketown, men and women who did not have the good sense to pack up and leave until a she-elf told them to. Bard found a clever way to break out of jail (I have no memory of why he was there) while his pitiful wife and children ran around whining about his whereabouts, “Da, where is da?” To hell with Da. A dragon is destroying the town. Get Out Now.

I would like to say that this was the only appearance of helpless screaming women in the film. Sadly, I cannot. They showed up everywhere and often. At one point I found myself thinking, “For the love of God, how many screaming women can Peter Jackson put in one movie?” Just when I was ready to scream myself one townswoman finally turned around, grabbed a weapon and said, “Wait a minute! This book might have been written during the Great Depression but now it’s freaking 2014. We can defend ourselves damn it!” Or something to that effect. Jackson likely offended Tolkien purists with that scene and his interpretation of Galadriel. She rescued Gandalf from a bird cage, picked up the wizard’s battered body and easily carried him to safety. This sequence stands out as my favorite, because it is all about the rings of power. It gave us a fantastic preview of LOTR including the thrillingly-evil Nazgul, the noble Elrond, and a corruptible Saruman. To top it all off just when we thought Galadriel might not rise again she goes all exorcist and zaps the hell out of Sauron. Best scene ever. 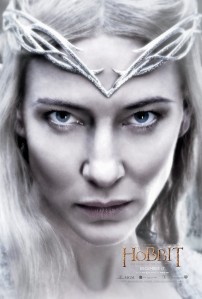 My heart broke for the other significant female in this film, Tauriel, as she said goodbye to her one true love, Kili the doomed dwarf. Evangeline Lilly performed beautifully in a role created to add a dose of estrogen to this story. Yet this is the plot line that requires the greatest suspension of disbelief, a significant assertion given the aforementioned dragon. The idea that Tauriel would choose any dwarf over the besotted Legolas is unbelievable. Are we expected to think that she would rather spend the rest of eternity nursing a broken heart instead of shacking up with Legolas? I’m not buying it.

I could not help but notice that someone in the production office has a thing for horns. The film featured an inordinate number of them, both the musical and animal variety. One dwarf, I will call him Dimli stands on Thorin’s mountain of rock wrapped in an elaborate tuba, another blew a horn so long it seemed to go on for miles. Meanwhile, Legolas’s father showed up for battle riding a lumbering coat rack. I understand he wanted to emphasize his position as the woodland elf, but this moose epitomizes inefficient transportation.

On an unrelated note, did any of you spot the skull codpiece worn by Azog the Defiler? I couldn’t help but look at that skull, repeatedly, as Azog battled Thorin, and then feel as though I really should not be looking there so often. Incidentally, casting the dreamy Manu Bennett in this role seems like a terrible waste.

At times, the film appears to have been made by a director who has too much power. One whose collective body of work has earned billions of dollars and a slew of Oscars thus garnering him license to do whatever the hell he wants with these characters. I doubt, for example, that he received notes from the higher ups telling him that The Battle of the Five Armies included one too many subplots; Alfrid the cross-dressing weasel comes to mind. Or that the film leaves open its central question – who ended up with all that gold? And here’s why, Peter Jackson has earned that power. He crafted the Lord of the Rings for the screen so perfectly that I will forgive him anything in The Hobbit. He could spend twenty minutes fleshing out Radagast’s obsession with rabbits and I would defend to the death his right to do so.

Plus, I have never been too attached to The Hobbit. I brought pretty low expectations to all three films. Not so for Guy. The Hobbit is his favorite book. About a year after we got together I agreed to read it and he agreed to read my favorite book, Anne of Green Gables. To his credit he read Anne and did not say a negative word about it. In fact he didn’t say anything about the book. It did not surprise me when he chose to forgo Anne of Avonlea, Anne of the Island, Anne of Windy Poplars, you get the picture. As for me, I read The Hobbit and it didn’t rock my world. I couldn’t get attached to any of the dwarves, because I couldn’t keep them straight. Bilbo was interesting enough and I loved the riddle-me-this section with Gollum. Nevertheless the power of the ring drew me in. While Guy was abandoning Anne I was moving on to the Fellowship of the Ring which he now tells me was his plan all along.

When it comes down to it, I love Peter Jackson’s version of Middle Earth. Every Christmas we watch the Lord of the Rings. Well, maybe not all of the Frodo and Sam parts. Anyway, next year we will add The Battle of the Five Armies to our holiday schedule. Jackson seamlessly tied the two trilogies together when Thranduil sent Legolas off to find some guy named Strider and Gandalf knowingly deposited Bilbo in the Shire to babysit the One Ring for the next one hundred years. When Ian Holm’s Bilbo answered the door for his old friend and the camera zoomed in on a map of the Lonely Mountain I smiled. The path to the Fellowship was complete. Billy Boyd’s farewell song poignantly wrapped up our big screen love affair with Middle Earth.

Sure, The Battle of the Five Armies isn’t perfect, but the man who cast Viggo Mortensen as Aragorn has my loyalty, forever.

Film Azog the Defiler, Bard, Bilbo, Galadriel, Gandalf, Legolas, Peter Jackson, Smaug, Tauriel, The Battle of the Five Armies, The Hobbit, The Lord of the Rings